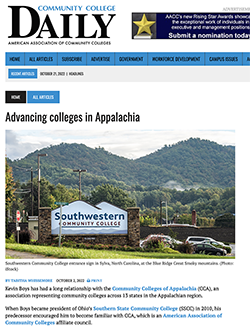 Kevin Boys has had a long relationship with the Community Colleges of Appalachia (CCA), an association representing community colleges across 13 states in the Appalachian region.

When Boys became president of Ohio’s Southern State Community College (SSCC) in 2010, his predecessor encouraged him to become familiar with CCA, which is an American Association of Community Colleges affiliate council.

Boys went to a small conference – “I’m not sure there were even 13 of us in the room,” he says – and has been involved ever since. He served on CCA’s board and was chair when the executive director had to take leave. Boys helped to keep CCA moving forward, even as he was SSCC’s president.

When he retired from SSCC earlier this year, taking on the executive director role permanently appealed to him.

“At the time, I thought it might be something I could do and still contribute without the pressures of a presidency,” Boys said. He’s one of two CCA employees. It’s a part-time role, but “like all part-time jobs, it’s not as part-time as I thought.”

In September, members of Ascendium’s Education Philanthropy team visited Sing Sing Correctional Facility, where they had the opportunity to meet directly with the facility’s students. We’ve gathered some reflections on that visit, as well as a trio of nationally distributed resources that uplift the voices of incarcerated learners and the work being done to help this population succeed.